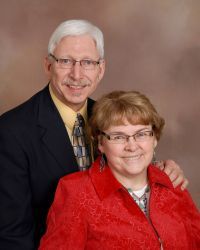 I first accepted Christ when I was 13 years old and was baptized at 15. I had accepted Christ but my life headed downward. After high school and vocational school, I got in the wrong crowd. I ended up starting to drink and have parties. I wanted to fill a void in my life. I just wanted to be part of the crowd. At one point, I was so drunk I passed out in the bathroom and woke up in my own vomit. My wife, before we were married, said, “You better cut it out! If you don’t, I’ll leave you.”

That was the point where I knew I had to do something different with my life. I told my buddies I was rooming with, ‘I need to leave. I need to find my own apartment.’ So, I did.

Karen was very pleased with that. She saw I was making changes in my life. So, I asked her to marry me and she accepted. We got married May 15th, 1971.

But after we were married we knew there was something wrong. Something missing in our lives.

I heard about a crusade in Forest Lake, MN in August of 1971. I had followed Lowell Lundstrom and his crusade team since I was a kid. They would go to different schools and put on crusades. I loved their music so I said to my wife, “Lets go there on Sunday.”

So, we went… for the music.

And then Lowell started preaching….

He asked the question, “Is your name written down in the Lamb’s Book of Life?” It was like he was talking directly to us in the crowd of hundreds of people. The tugging of the Holy Spirit was just as clear as can be. Karen and I looked at each other and right then and there we knew that wasn’t true of us. We needed God’s Spirit in our lives.

We had gotten married but there was still something missing in our souls.

Even though we went to church every Sunday.

The Holy Spirit convicted us. It was time.

We accepted Jesus Christ as our Lord and Savior. So, 1971 was a big year in our lives.

In 1975 we started having children. First came Rachael. Then Dave. And then Krissy.

Right away when Kris came home we knew there was something wrong with her. She started having seizures. After the first or second day, we had to put her on seizure medication.

After a couple months, we noticed there was more wrong with her. The doctor gave us a hint saying there was more than seizures going on. She might have a disability. We were told we should go to Courage Center. At that time there was a speaker about to give a talk about cerebral palsy. Kris was about 2 years old at the time.

That time just shook my faith. I told God exactly what I thought. I said, ‘Lord, how can you do this to me?!’

But it is so cool. The Lord is so kind. As people go through things, sometimes God just lets them go through it.

My heartache, He let me go through it.

My feelings and emotions, He let me go through them.

But as time goes on, the Lord says, “Alright, its time. Time to move on.”

I was very angry with God, knowing that Kris might never be able to walk or talk. It shook my faith. It rattled me.

We didn’t know how to work with or deal with Krissy’s disability. We had a split level at the time and thought we would have to sell the house. Karen wasn’t working. We had a 5-member family. I was the only income. As a father and provider, all of these things went through my mind.

I thought, ‘Lord, how in the world are we going to do this? Can you help me get through this? Not figure it out, but get me through it?’

We would go to different churches. We would be in the front and Kris would have a seizure and Karen would take her out to the back. Not one person would come and say, “Can we help you? Can we pray with you?”

We got really hurt. I mean… we got damaged. Our kids saw what mom and dad were going through. They got damaged.

So, that took us out of church for a whole year.

God is so gracious. He put the people in our lives we needed…

We’ve been at MapleRidge since 1984 and the people here just love us and love Kris.

People will ask us, “Where’s Krissy today?! We miss her!”

She is one of the best things that has ever happened to us.

She adds joy in our lives and joy in the lives of other people.

But as you go through life, you look back on it and see… I did make it. God brought me through it all.

He brought people in our lives. God’s Spirit and the strength of other people helped us through.

I know God can heal.

God is going to heal Kris.

When? It’s in the Lord’s hands.

The timing is His. It’s up to Him.

Until then, He brings people in our lives.

Maybe it won’t be on this earth.

Maybe not until she goes through those gates.

But she will definitely be healed then.